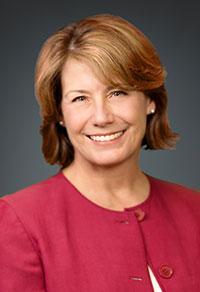 Annette became licensed to practice law in 1989 and was admitted to the Wisconsin Bar that same year. Having met her husband Chip, a native Kansan, while attending Marquette University, she and her husband relocated shortly after graduation to the Kansas City area where Annette became licensed in both Kansas and Missouri and practiced there for a few years. Employment opportunities ultimately brought Annette and her family to the Naperville area where, after becoming licensed in the State of Illinois, she settled in with the Nadelhoffer Law Firm for the next eight years, and focused on growing her practice while establishing the firm’s first litigation team.

In 2000, Annette took a hiatus from the practice to raise her four children with her husband. During this time, she became immersed in her Wheaton community. She was appointed to the St. Michael’s Parish School Board where she served in a number of capacities including, Secretary, Vice President, and President. She also served on the Parish Council, lobbied for and implemented the church’s first Lenten Fish Fries (now in its eighth year), chaired the school’s Fun Fair for 4 years, was the head coach for four park district and two Wheaton College cheer teams, and had the honor of being appointed Eagle Scout Development Leader for the Boy Scouts of Troop 34 for several years.

Upon her return to the practice of law, Annette joined the Law Firm of Mullen & Winthers, P.C., where she developed a passion for working with people confronting some of the most difficult issues of their lives, whether as a result of divorce or child custody battles. Annette recently joined Esp Kruezer Cores, LLP where she will continue to develop her professional skills as a litigator focusing on family law matters.