The Differences Between Legal Separation and Living Separate and Apart 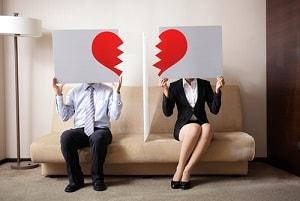 Have you recently filled out an application that asked about your marital status? Do you remember what the some of the checkbox options were? Most such questions include answers like “single,” “married,” and “divorced,” but some have additional options such as “single, never married” and “widowed.” Perhaps the least common is an option for “separated.” Depending on the purpose of the application or question, the precise definition of “separated” may not be all that important, but if you are in the process of getting divorced, it is important to know what the law in Illinois says about separations.

The word “separation” is generally used in two very different ways in the context of divorce. The first is rather casual and is often used by the spouses themselves to describe their situation while their marriage is coming to an end. For example, if your spouse recently moved out, you might tell your friends that you and your spouse are separated. This type of separation, however, is not considered a “legal separation.” Instead, it is considered a period of living separate and apart.

A legal separation, by comparison, is a relationship status that is determined by court order—similar in some ways to a judgment of divorce. In fact, to obtain a legal separation, a couple must go through many of the same considerations that they would during a divorce. Arrangements must be made for any minor children, spousal maintenance may be considered, and if agreed upon by the spouses, marital property may be divided. The spouses remain married to one another, however. Legal separations are not particularly common, but they may be appropriate for those whose religious or personal beliefs prevent them from seeking a divorce. A legal separation may also be suitable when divorce proceedings are expected to drag on for months or years.

Under Illinois law, there is no requirement for a couple to obtain a legal separation before pursuing a divorce. In fact, a couple is not even required to live separate and apart before getting divorced. If, however, the spouses do not agree that the marriage has broken down beyond repair, a six-month period of living separate and apart will be accepted by the court as irrefutable proof of irreconcilable differences.

If you are considering a divorce in Illinois and have questions about the two types of separation, an experienced Wheaton divorce attorney can help you find the answers. Call 630-871-1002 to schedule a free consultation at the Andrew Cores Family Law Group today.