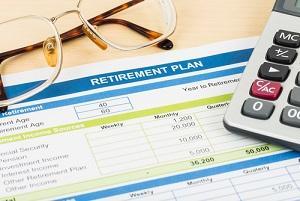 Most people do not think about retirement benefits or accounts until they need to do so. Young people and couples may briefly mention such things in a prenuptial agreement or other type of discussion before or during their marriage, but too often, retirement is just something to think about in the future. The exception to that rule is during a divorce, as retirement savings and benefits are some of the most commonly disputed assets between spouses. It is extremely important that you understand what you are entitled to receive, if anything at all.

If you have been at the same job for an extended period of time, there is a good chance you are enrolled in either a 401(k) account or an IRA (Individual Retirement Account). Such accounts are generally held to be marital assets (even if they only have one name on them) because, in most cases, they are either acquired or appreciate in value during the marriage. Dividing these accounts during a divorce can be somewhat complex because the rules differ significantly between states. 401(k)s, however, are governed by federal law—the Employee Retirement Income Security Act, or ERISA. Thus, the same procedure applies everywhere.

By law, if you are married, your spouse is the beneficiary of your 401(k), and to remove them as such is not easy, even after a divorce. Generally, you need your spouse’s consent to remove him or her as your beneficiary, and a divorce could complicate matters. If you determine, or if a court holds that your 401(k) is a divisible marital asset, it must be divided equitably between you and your spouse. Spouses are not guaranteed an equal share, but it is reasonable that each of you will need retirement savings for later in life.

Compared to 401(k)s, changing an IRA is much easier and less labyrinthine, as they are not governed by ERISA. IRAs do not have an automatic beneficiary, and as such, will not go to any particular person unless you specify your preference. If you were to die without naming a beneficiary, your IRA proceeds will go to your estate.

Keep in mind that in Illinois, only the marital portion of your IRA can be divided during a divorce. The amount you contributed, if any, to the account before your marriage is considered separate property and not part of the marital estate. The IRA is marital property, but part of its value may not be. Also, proceeds from an IRA can be collected tax-free, while 401(k)s and other retirement accounts are usually subject to taxation. This can be very relevant when disputing how to divide accounts. Courts will usually look to avoid awarding a spouse a share of a retirement account only to have most of the funds go toward applicable taxes.

Even in an amicable divorce, there can be confusion and discussion about how best to apportion retirement accounts, because the stakes are so high. If you and your spouse cannot agree, or if you have questions, our passionate DuPage County divorce attorneys can try to help. Call any of our offices today to set up an initial appointment.