Posted on Thursday, 24 July 2014 in Same Sex Marriage in Illinois 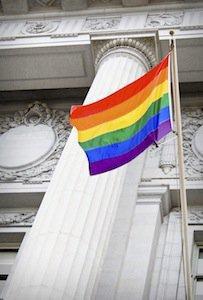 However, an old Illinois law, Section 217 of the Illinois Marriage and Dissolution of Marriage Act, may prevent the marriages from being legitimate. The law voids marriages in Illinois if they take place between people who live in a state that would not, itself, recognize their marriage. This means that a marriage between a same-sex couple, whose home state did not allow same-sex marriage, would be void.

What the Statute Says

This section of the law, which was enacted in the late 1970s, voids any marriage entered into by a party who lives in another state and intends to keep living in that other state, if the marriage would not be legal in the person's home state. Essentially, the statute applies the marriage law of a person's home state to any marriage happening in Illinois. The statute was initially enacted to account for issues related to marriages by underaged parties. People would cross the border into Illinois to get married because Illinois would allow it earlier than some other states.

How This Affects Same Sex Marriage

This issue affects same-sex marriages because of the current schism between states that recognize same-sex marriage and those who do not. Thus far, the federal government has stayed away from introducing a uniform rule about same-sex marriage across the entire country. This means that each state is free to choose for itself whether or not to recognize these sorts of marriages. This can cause problems for couples traveling to Illinois to be married because their home state may not recognize the marriage. For instance, in 2004, Missouri voters amended their state constitution by popular referendum, making the recognition of same-sex marriages unconstitutional. That means that if a couple from Missouri crossed into Illinois for the purpose of getting married, the marriage would be void under Illinois law, unless the couple intended to move to Illinois on a permanent basis.

Illinois lawmakers were aware of the trouble that this section of the Illinois Marriage and Dissolution of Marriage Act could cause for couples coming in from other states. At present, some representatives have plans to adjust Section 217, but the Illinois legislature is currently in recess, so those plans will have to wait until the house and senate are back in session.

Family law can be a difficult patchwork of conflicting statutes. Consequently, it is important to find an experienced DuPage County family law attorney who understands the full field of the law to ensure the smoothest possible experience.
PAY YOUR BILL