The Legality of Destination Weddings 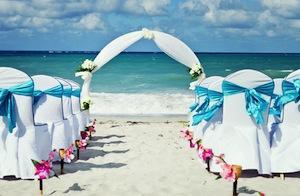 Travel sites estimate that approximately 20 percent of all U.S. marriages involve destination weddings. They can be an extremely attractive option for many couples, especially if the climate in your hometown is not ideal for the wedding you imagine. However, there can be legal pitfalls if you do not properly research the law in your chosen destination. Symbolic ceremonies are common, but if you plan for your marriage ceremony to be binding and it is not, problems could develop down the road.

While the specifics will obviously depend on the country in question, many countries require documents which prove that both parties have the ability and the agency to marry. For example, officials may ask for your passport, birth certificate, and a copy of any relevant divorce decree from a previous relationship. It is also possible that they will ask for an Affidavit of Eligibility to Marry or an affidavit of single status. While there is no universally accepted form for this, many consulates do have their own, so it is important to plan ahead.

It is also common in many countries, especially in Europe, to require a residency period before any marriage conducted there is held to be valid. For example, France mandates that one or both participants in the wedding must be resident in France for at least one month before they can marry. However, Italy has no requirements of this sort. Checking beforehand can save untold amounts of time and money.

Can My Embassy Help?

In the area of marriage, there is not much that the U.S. embassy or consulate is legally able to do to help with your marriage or to rescue you from the consequences of an oversight. As a general rule, no marriages may be performed by Foreign Service personnel, on or off the premises of the embassy. If you require information, local authorities are often the best to ask rather than U.S. consular personnel. The legality of a marriage is not based on whether the Foreign Service is present or not, but rather on whether you have followed the relevant laws of the country in question.

One area where the U.S. embassy may be of assistance is in authentication or notarization of documents. Some countries request relevant documents, but will only accept them if they have been notarized by U.S. consular officials to ensure authenticity. With sufficient notice, you are generally able to have your documents authenticated at your embassy or consulate in time for your ceremony.

Faced with what can be stringent requirements, many couples simply elect to have a symbolic ceremony in an exotic destination, saving the actual legal marriage for when they are back in the United States. If you decide you still want your memorable wedding to be the legal one, contact an experienced DuPage County family law attorney. Call 630-871-1002 for a free consultation at Andrew Cores Family Law Group today.