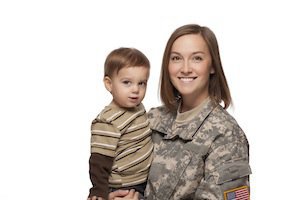 Service members in the U.S. military often experience extra strain on their marriages due to the stress of military life, especially during long deployments. Research by the RAND Corporation reveals that the military divorce rate exceeds the civilian divorce rate, and the risk rises higher with each successive deployment. However, a recent child custody case in Washington state revealed that the issues with divorce and deployments do not end once the divorce decree is finalized. A naval service member was issued a warrant for his arrest when he failed to show up for a custody hearing that his ex-wife had scheduled while he was deployed.

The Washington case centered around a Washington-based submariner who was currently on deployment in Michigan. The submariner had primary custody of his daughter, and had left the daughter in the care of his new wife while he was deployed. The man's ex-wife filed a petition to change the custody order while he was serving in Michigan. The submariner naturally failed to appear, and the judge, who was unaware that he was currently deployed, issued a warrant for his arrest. Once the judge was made aware of the submariner's deployment, all proceedings were properly postponed.

The law provides military personnel with a variety of rights and protections during these sorts of child custody cases to ensure that their service to the country does not interfere with their ability to raise a family. For instance, the Servicemembers Civil Relief Act allows deployed personnel to apply for a 90-day stay of their legal hearings. Such a stay requires the service member to show the following:

Additionally, the law allows service members to file for a stay of longer than 90 days if they can show cause for such an extension.

The law also provides other protections to deployed service members. For instance, courts are not allowed to permanently alter custody orders while the parent is deployed. Further, upon returning from a deployment, the parent has the right to revert back to the custody plan that was in place before they were deployed, unless the other parent can prove that such a reversion would not be in the best interests of the child.

If you are a service member who is involved in a custody dispute or a military divorce, contact an experienced DuPage County child custody lawyer today. Our skilled team of professionals can help defend your rights as a parent and as a member of the armed forces.
PAY YOUR BILL