Should I Sign a Prenuptial Agreement Before Getting Married?

Posted on Friday, 29 January 2021 in Prenuptial Agreement in Illinois 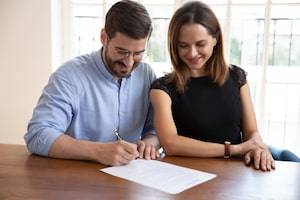 Most people have heard of prenuptial agreements, but many consider them something that happens in Hollywood or with other wealthy couples. However, there are quite a few ways in which an “ordinary” couple could benefit from drafting and signing a prenuptial agreement. While you may think that you will never split up, the reality is that a substantial number of all marriages—up to 40 percent or more, according to some estimates—end in divorce.

What is the Purpose of a Prenuptial Agreement?

A prenuptial agreement is primarily a formal way for a couple to decide how their property and assets should be split up in the case of a divorce. As such, it is somewhat like a property settlement that is agreed to before anyone is even thinking about filing for a divorce. It is important to keep in mind that a prenuptial agreement can also address concerns, such as investments and life insurance, that may be applicable during the marriage as well.

Individuals with property, a business, or a potential inheritance often want to make sure these assets do not become marital property. A prenuptial agreement is one way for both spouses to keep the property they bring into the marriage separate. In a prenup, you can also choose to designate certain assets as marital property, even if they would otherwise be considered non-marital.

What Are the Risks of Signing a Prenuptial Agreement?

A prenuptial agreement is a legal contract. If you willingly sign the agreement, it will be nearly impossible for you to later say you did not understand what was in it. The biggest risk for signing a prenup is giving away important rights you would otherwise have in a divorce. You should always have your own independent attorney examine a prenuptial agreement before you sign it.

Can We Sign an Agreement After We Are Married?

As with prenups, postnuptial agreements must be entered into freely and voluntarily. If there is any coercion or other inappropriate attempts to interfere with someone’s exercise of their free will, the agreement is likely to be voided.

If you are considering a prenuptial or postnuptial agreement, consult with a skilled and knowledgeable Wheaton family law attorney to ensure that your rights are fully protected. Call Andrew Cores Family Law Group at 630-871-1002 and schedule your free consultation today.