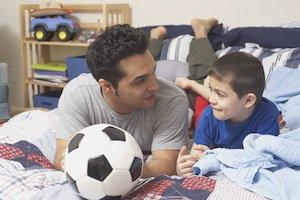 Summer can be a particularly stressful time for parents. Kids are home from school and need supervision and entertainment. In addition to the time these things take, there can be an added financial stress during an already stressful time.

In fact, the majority of adults feel extra worry about money during the summer, and this worry is particularly pronounced among parents of children under 17, with 62 percent of whom expect to spend over $1,400 on activities for their kids, according to a study done by the American Institute of Certified Public Accountants. These stresses are only compounded for divorced parents who have an extra layer of complexity because of joint child custody agreements.

Handling joint custody arrangements can be especially difficult during the summer months for a variety of reasons. First, many co-parenting divorced couples find harmony in routine. The school year tends to lead to more predictable schedules than the summer, which often involves more plans with friends, camps, and possibly even family vacations. Beyond this, the summer can cause problems because it is another time when parenting styles can conflict.

Debates can occur regarding what types of camps or programming to send a child to, how trips and vacations should be planned, and how much time is spent with family or friends. All of these can lead to disagreements between well-meaning parents.

Finally, divorce often places a financial strain on families. Divorces can often lead to duplicate expenses for things like living space and groceries, meaning that money does not go as far as it once did. This can be felt especially keenly during the summer when people are already prone to stressing about budgets.

Fortunately, these problems can be solved, or at least mitigated, through careful planning and good communication. The lack of a normal routine for the children can lead to unpleasant surprises where one parent is planning a family vacation while the other is giving them permission to spend time with their friends that week.

It is especially important during this time of year to keep the lines of communication open between parents so that the lack of a routine does not lead to conflicting schedules. Similarly, communication and compromise can also help resolve conflicts related to parenting. Understanding that both parents have the child’s best interest in mind and reaching some balanced middle ground between the styles can often make the summer go more smoothly

Careful planning can also help alleviate financial issues. While sitting down and calculating a budget cannot make money stretch further, it can alleviate the constant financial worry. Additionally, people who have a budget worked out will be less tempted to spend more than they have, which can prevent stress later on.

If you are thinking about filing for divorce and would like to learn more about child custody and joint custody arrangements, contact a DuPage County divorce lawyer today. A skilled attorney can help you understand the complexities of the divorce process and let you make an informed decision.