The Effects of Divorce on Men

Divorce is not easy on any one who is involved.  There are various studies that show the effects that divorce has on women and children.  Some women may become sad from being out of a relationship while others find a particular freedom from being out of a bad situation.  Children can be ever more devastated by a divorce.  But the effect on men was revealed in a recent study. 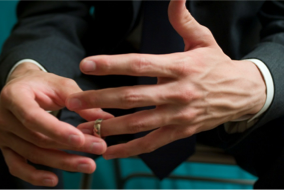 The study is called “The Influence of Divorce on Men’s Health” published in the Journal of Men’s Health. It was a joint study by Dr. W. David Robinson of Utah State University and Dr. Daniel S. Felix of the University of Nebraska-Lincoln.   They connected the trauma of divorce with various physical ailments such as heart disease, stroke, and high blood pressure.

There are also emotional reasons why divorce is difficult on men.  After being a spouse for a while, it becomes your identity, either due to their thoughts about marriage or society’s constructs.  Once a decision is made that ruins that role, it can be more difficult to define that former purpose.  This can lead to depression without finding a new responsibility or task.

It is also difficult for fathers to have their paternal ability called into question.  Occasionally the shame of a divorce can cause men to pull away from their children.  They feel as though they are not necessary to their family because the marriage is over, but they are still important to their children.  Maintaining a bond either through custody or visitation can help father’s regain their self-worth.

The last reason that men struggle after a divorce is due to how they typically handle their feelings.  Men generally bottle up their feelings and stop themselves from seeking help.  They should turn to friends and family to take some of the burden of their emotions.  If you are considering filing for divorce and would like some answers, turn to a legal professional for assistance.  Contact an experienced divorce attorney in Wheaton who can guide you through the divorce process.