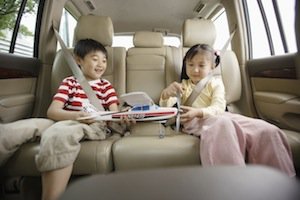 While everyone acknowledges that divorce can be difficult on children, new research reveals that a family's income level may play a role in just how much children are affected by divorce. A new study by researchers at Georgetown University and the University of Chicago, and being published in the journal Child Development, posits that young children of wealthy families may be more adversely affected by their parents' divorce than similarly situated children of less well-off parents. The study's authors did not focus on the causes of the difference, but they did put forward several theories.

The new study examined data related to almost 4,000 children between the ages of three and 12 from the U.S. Bureau of Labor Statistics. The data included information about the children's family income levels as well as surveys regarding the children's behavior. The children's behavior was analyzed using a 28-point survey that was developed to quantify adolescent behavioral issues.

The study's authors analyzed the behavioral patterns of the children based on age and income level. They then divided the income levels into three groups based on those living at or below the poverty line, those living at one to three times the poverty line, and those living at more than three times the poverty line. The study found a greater increase in behavioral problems for the wealthiest group of children, provided that the children were under the age of six. Additionally, the study also examined the effects remarriage and blended families had on children. The authors found that children in higher income brackets and over the age of six fared better than their less wealthy counterparts when it came to reintegrating into a blended family structure.

Although the study did not focus on the reasons for this correlation, the study's authors put forward a variety of theories as to why this trend might occur. One initial theory was simply that more well-off children were more likely to experience a substantial dip in income as a result of the divorce, and thus lead to behavioral issues. However, an analysis of the data showed that that explanation was not backed up by the facts. Instead, the authors suggest that it could be a function of the different social norms among the income brackets. Children of wealthy families tend to be more used to stable home lives, and their peer groups tend to involve traditional family structures. This means that the divorce process can be less familiar and more stressful for them, which may lead to their acting out if that stress is not properly managed.

If you are considering filing for a divorce and would like to know more about the process, contact a Wheaton divorce attorney today. Our dedicated professionals are here to answer your questions, and help you understand your different options.