Why You Can Be Thankful for a Divorce 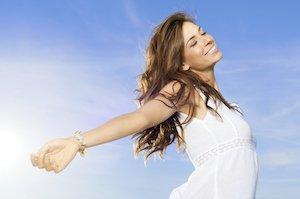 People often view their divorce in a negative light, and that reflex makes a lot of sense. Divorce is, after all, an ending, and the process can be painful at times. But, divorces also have many positive aspects for which you can be thankful.

A divorce can be a freeing experience, it can decrease your stress level, and it can help you get a fresh financial start. While it is impossible to control the varying emotions that you may experience during the divorce process, it may be helpful to at least consider the positive aspects. Mentally reviewing some of the possible benefits of divorce can be helpful, especially during more stressful and contentious separations.

One of the biggest benefits to flow from a divorce is the freedom that comes with it. Relationships, even healthy ones, are built on compromises. Everything from which house you live in to what takeout place you order from becomes a two person decision. While such compromises are an important part of relationships, many people enjoy the freedom of no longer having to make them. After a divorce, people can find themselves redecorating rooms, reconnecting with old friends, and rediscovering hobbies that had fallen by the wayside during the marriage.

The end of a marriage can also bring about a reduction in stress. Bad relationships can weigh heavily on daily life since they often involve constant fighting or bickering. Those disagreements increase stress, and simply make life harder day in and day out. A divorce can help eliminate the pervasive stress of a bad relationship and allow you to move on with your life. In fact, a study done at Kingston University in London showed that women were happier after their marriages ended. And, that was true even if the divorce placed more of financial strain on the women.

Of course, there can be financial upsides to divorce too because it helps give people a fresh start. If you had a spouse who ran up credit card debts during the marriage, that will still have to be dealt with in the divorce process, but divorcing makes their future debts much less likely to apply to you. Furthermore, divorcing can actually come with other financial advantages. For instance, a divorce makes it easier to avoid the Alternative Minimum Tax, a tax rule that often increases the burden of middle-income, married couples. And, according to data from the National Institute of Aging, divorced women who never remarry end up financially better off than their married counterparts later in life.

If you are thinking about getting a divorce you can be thankful for later, contact an Illinois divorce attorney today. Their knowledge and experience can help ensure that you and your interests are fully represented in court.
PAY YOUR BILL